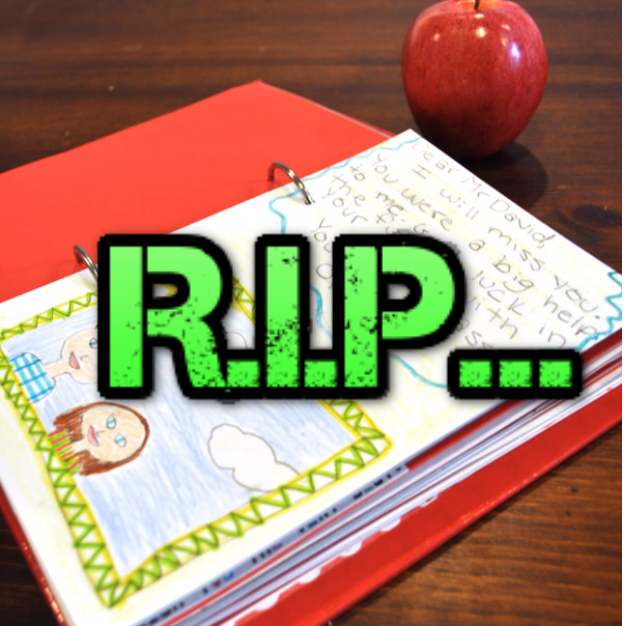 Where I am in my teaching career and where I work as a teacher, paper portfolios to showcase student achievement are a thing of the past.

This is something that puts a smile on my face.

In the modern age of technology, apps, blogs, and micro-blogs, there really isn’t a need for traditional paper portfolios.

Early in my career, when I was a kindergarten teacher, I dreaded portfolio season. It happened three times a year. My school wasn’t using any sort of inquiry curriculum and were straight up “old-fashioned” with the way they did things.

Each term we collected the best artifacts from that term. The kids’ best work. We then placed it in a large binder and decorated every page with photos of the child, stickers, origami, etc. It was more like scrapbooking than an academic endeavor. There was a real formula. Six areas, two pages each had to be covered. A specific number of pieces of work as well as fifteen photographs.

After my own children went to bed at 8: 00 pm, I’d be up until 11:00 pm or midnight for more than a week working on the portfolios.

Years later I found myself teaching Grade 2 at an International Baccalaureate school. An IB international school.

I was told that we still had to produce student portfolios at the end of each Unit of Inquiry. I was also told that students themselves were supposed to choose their favorite pieces of work and make their own portfolios.

Each student has a section in a filing cabinet where they were to keep their work. Most did while some did not.

When it came time for them to go through their section of the cabinet, select their work and then place it in their binders…

It looked like a paper mill had exploded in my classroom. A massive mess, confused students. Some put their classmates’ work in their portfolios without realizing while others got into fights and arguments.

It was rough, but we got through it.

A few years later, while still at the same IB school, we were starting to use more and more technology. We were being encouraged to go more paperless with our teaching. Every student had an iPad and the apps to do amazing work without paper.

Of course, we used paper and worksheets from time to time, but maybe only 20% of our work used paper or notebooks.

I was still expected to make that same sort of paper-based portfolio for the students to use during their three-way parent conferences!

How was I supposed to do that?

Looking back on things I think I had to make custom and specific pieces of work simply to put in their portfolios. That was a colossal waste of time. Simply busy work to fill the binders!

Those days are currently a thing of the past. I hope I never have to go back to the days of paper portfolios. Now my students have digital portfolios. They create so much content on a variety of platforms and share it with teachers and families on Seesaw.

Life is much less stressful for me as an educator now.

What do you do for portfolios at your school? Kevin O’Shea is an IB/PYP educator currently based in Beijing, China. He is a father, husband, and avid conservationist. Kevin is also the host of the upcoming Making Better Teachers Podcast as well as the host of the long-running Just Japan Podcast.